Users currently have little control over where in the world their packets travel while en route to their destinations. Given recent events (censorship of Internet traffic, suspicious "boomerang routing," and monitoring of users' data), we seek to empower users with greater control.

We introduce Alibi Routing, a peer-to-peer system that allows users to understand and control where in the world their packets don't go. In other words, it lets users provably avoid parts of the world while communicating with others or browsing the web.

HOW DOES IT WORK?

For detailed information, please view our talk at SIGCOMM 2015 or check out the FAQ page. Below is a high-level description:

A user specifies two things: who they want to communicate with (the destination), and arbitrary "forbidden" geographic regions they wish to avoid while doing so. If successful, we return proof that the user's packets did not traverse the forbidden regions.

Alibi Routing then searches its peer-to-per network to locate other peers who can relay the user's packets while provably avoiding the forbidden region. We call such a peer an alibi.

Here's an example of a user in Italy trying to communicate with a server in Norway while avoiding Germany: 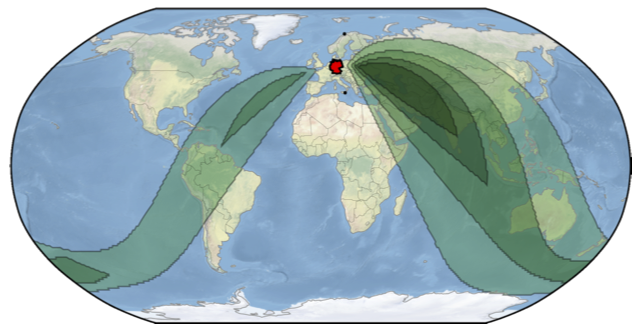 The green regions denote where alibis might exist. Alibi Routing searches these regions for alibis. If it can find one, then the user's packets are forwarded through the alibi. The user gets proof that the alibi avoided the region, if it was able to do so.

The code and data from our SIGCOMM 2015 paper are available here:

The following people have contributed to this project: